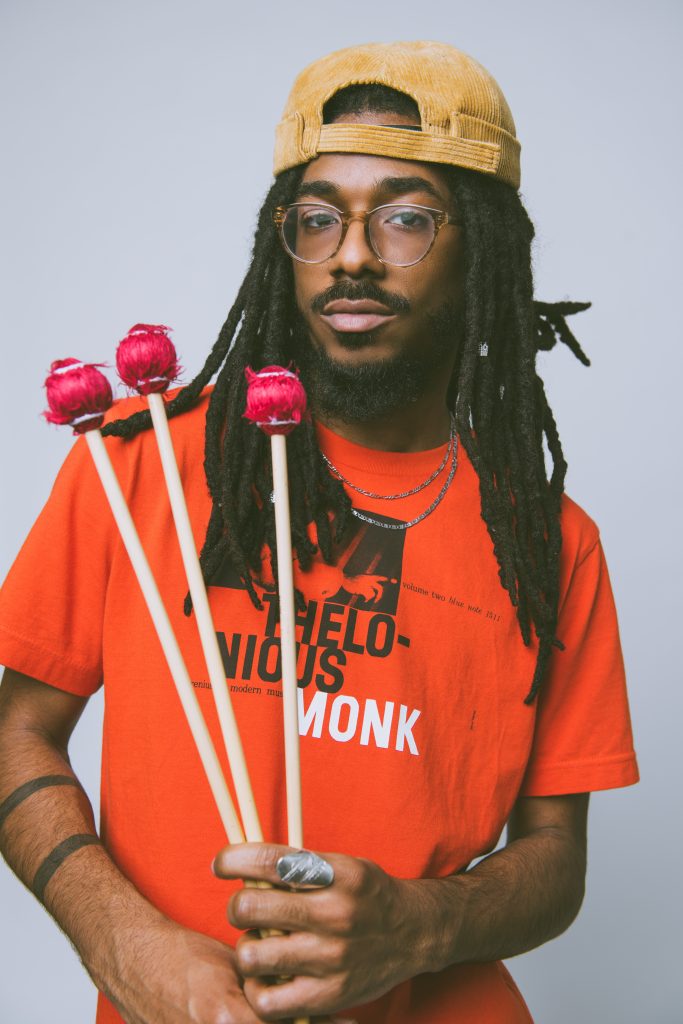 “Ross’ playing erupts through the layers of lush arrangements like consistent currents of electricity, high-powered and full of luminous energy ”

– DownBeat
“Particularly on his own compositions, Mr. Ross and the band treat rhythm as both fundamental and unfixed, while dousing the music in harmonies derived from modern gospel”

Joel Ross continues refining an expression that’s true to his sound and his generation. In 2019, the vibraphonist-composer issued his anticipated Blue Note debut, Edison Award-winning record KingMaker to eruptive critical acclaim, followed by his 2020 release Who Are You? which features his band Good Vibes at their most synchronous. New York Times critic Giovanni Russonello praised the album for the ways it “speaks to a new level of group cohesion…more tangle, more sharing, more possibility.”

Ross has topped the DownBeat Critics Poll Rising Star category for vibraphone — graduating beyond the Rising Star to well-honed artist in 2021 — as well as the Jazz Journalists Association Critics Poll for Mallet Instrumentalist of the Year in 2020 and 2021. He recently became one of the youngest artists to earn a coveted Residency Commission from The Jazz Gallery and a spot in The Jazz Gallery All Stars band through which he performed live at The Kennedy Center. In 2020, he received a Jazz Coalition Commission for Praise in the Midst of The Storm, a performance suite featuring Brandee Younger, Marquis Hill, Craig Weinrib, Dezron Douglas and longtime friend and collaborator Immanuel Wilkins, with whom he recently performed a three-night duo program live at The Village Vanguard as part of the storied venue’s streaming series. In 2021, Ross enjoyed a residency at Roulette Intermedium for Jazzfest Berlin, premiering original work She Walks in the Spirit alongside Gabrielle Garo, Brandee Younger, Mimi Jones, Savannah Harris and Nappy Nina, and 4nette alongside Immanuel Wilkins, Thomas Morgan and Craig Weinrib, in January and May, respectively. He has performed multiple residencies at Baby’s All Right in Brooklyn.

Folkloric resonance incubates Ross’ artistry. Improvising melodies or composing at the piano, he leaves space for a theme to emerge and evolve, always inviting creative response. Nimble, virtuosic lines approximate speech. He often transitions among the roles of storyteller, protagonist and supporting character. Inspired by mentor Stefon Harris’ empathetic, whole-self approach to articulation, Ross has adopted an entire ethos dependent on truthful, ongoing communication. Honesty persists throughout his sets. And with each release, he reaffirms a commitment to authentic discourse.

During the pandemic, Ross began expanding his artistry to include creative positions away from the bandstand, including podcast appearances for Christian McBride’s “Live Wax” and Dave Douglas’ “A Noise from the Deep.” The Art Center at Duck Creek in East Hampton invited him to curate an entire performance program featuring original works from Joel Ross and Parables, Maria Grand and Patricia Brennan. In 2020, John Zorn tapped Ross for authorship contributions to the ninth installment of his theory and practice Arcana series. In 2021, Ross joined the adjunct faculty at Manhattan School of Music and The New School for Jazz and Contemporary Music in New York City.